Check out the latest play by prisoner inmates in Roumieh prison.

Magdi has spent 15 years on death row, waiting for his execution in an airless, overcrowded prison cell.

The jail where his life is supposed to end is wrapped in miles of barbed wire, surrounded by checkpoints and perched on top of the mountain that overlooks the Mediterranean.

Roumieh Prison is Lebanon’ s biggest high-security jail, notorious for bloody riots and terrible conditions, and home to some of the country’s most dangerous criminals.

But Magdi, a thin, greying man, says he never committed the murder he was charged with, and that the trial that put him on death row was rushed and unfair.

Over the years, he says, he has written countless letters to the authorities begging them to review his case, but he never received a reply.

Then one February afternoon in 2009, he suddenly had a chance to tell his story face to face, to some of the country’s most senior officials.

“I was so nervous,” Magdi recalls. “Just imagine – the prosecutor general, the minister of the interior, high ranking generals – they were all right here.”

Magdi, along with his fellow inmates, was on the stage while the officials were the guests of honour at the opening of the Twelve Angry Lebanese, a theatre play of a kind the Arab world has never seen before. 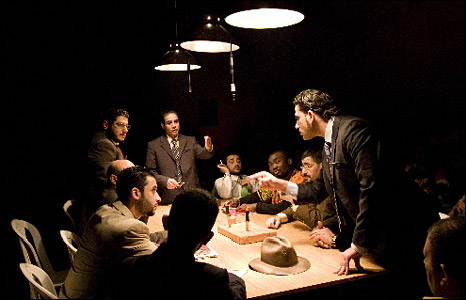 For two hours, seated just inches away from the improvised stage, the representatives of Lebanon’s government listened as inmates questioned the country’s judicial system, talked about prison conditions and told personal tales through their adaptation of Twelve Angry Men, a play by Reginald Rose in which a jury of 12 men meets to decide the fate of a boy who is accused of murder.

The performance was, the prisoners recall, a mind-boggling role reversal.

For Zeina Daccache, a young Lebanese actress and director with a passion for drama therapy, it was also a real triumph.

Zeina Daccache explains how the project came about – and what it was like on opening night.
“The problem was that no-one believed in the project, in fact everyone thought I was crazy,” she said.

Lebanese prisons are closed to the public and the media, and Zeina Daccache’s proposal of drama therapy was turned down twice.

But eight months after being rejected she secured funding from the EU she managed to gain access to the jail.

Prison authorities agreed to turn a former prayer room into an improvised theatre, and soon the 200 prisoners who applied to take part in the project began attending daily drama therapy sessions.

Within months of workshops and play sessions the group shrank to 45 inmates with whom Zeina began working on the actual play.

“I picked Twelve Angry Men because it’s the perfect play for this situation. It gives the inmates a chance to reverse roles, to be the jury, which is therapy in itself,” she says.

The group was diverse. The crimes of the inmates ranged from drug dealing to rape and murder. The sentences varied from a few years to life, and death row.

The only requirement for participation was commitment – of which there was plenty.

One of the inmates taught himself how to read so he could join the project, and another refused to quit despite serious health problems. Seated on benches in their barbed wire theatre, the inmates explain that the reason behind their enthusiasm is simple.

Zanelo, convicted drug dealer:
Others made fun of us for coming to work with Zeina, but I felt I suddenly had a reason to wake up in the morning

“This is the first time I have been treated as a human being,” said Mullah, who has been in Roumieh for 15 years.

Zanelo, a 60-year-old drug dealer, added: “Others made fun of us for coming to work with Zeina, but I felt I suddenly had a reason to wake up in the morning.”

All of them say that in one way or another the project changed their life.

“After the premiere, I cried. For the first time in my life,” says Hassan, a 30-year-old with piercing green eyes, who is in prison for a brutal murder of two friends.

But the group bursts out laughing, when Abu Abdul, whose trimmed beard and thick glasses makes him look like a professor, launches into a long speech on how he has become a better man.

“It made me rethink my crimes,” says Abu Abdul. “I used to sell drugs and forge money, but I will never do it again when I get out.”

But they are using the play to call for the reform of Lebanon’s prison system. In the monologues in the play they question the very way justice here is done.

They ask why the Lebanese authorities do not enforce the law that allows prisoners to appeal for the early release on grounds of good behaviour.

They raise the issue of long term pre-trial detention through the real-life story of a prisoner who has been jailed, without charges, for nine years.

The Roumieh authorities, who were at first sceptical about the project, are now full of praise for it. They say it brought unprecedented and much needed attention from the government in Beirut.

The inmates say they want the project to continue, but Zeina Daccache is waiting to see whether she can get the funding and the permissions to carry on.

And Magdi, the prisoner on the death row, is also waiting – no longer for an execution but a decision on his future.

After the opening of the Twelve Angry Lebanese, some officials, clearly moved by the play, went backstage and talked to him personally. He says they promised to look into his case.

Check out the original story here: