I Saw The Pet Shop Boys

Oh my! A sensational  night to remember for life.

After 26 years, Neil Tennant & Chris Lowe have still got it all. Neil’s voice is still as charming and still as angelic. Chris is still the same cool dude with the cool outfits who does not talk and plays kick ass keyboard and drums. Their show at the O2 Arena in London last night was their biggest indoor event to date.

We got to the venue 5 hours ahead. We found it empty but we knew it would get crowded quickly, and we waited at the entrance indicated on our tickets: Gate F. After half an hour of waiting, we found out by chance that there is another gate where you can queue and the first 80 people from there will be granted access half an hour before the other gates, to get the best spots, and so we waited there instead. We were numbers 68 and 69 which made us get in first and get a spot in the second row (standing), in the exact middle. The Pet Shop Boys were right in front of us!

The set was amazing, everything was based on the squares and colors of their new album YES which is recognized by the ‘check’ symbol made out of 11 bright colors.  The great thing was NO TEEN AGERS! At all, mostly people in their twenties and above, which made the night even better.

There was a band that opened for them called FRANKMUSIK. I had never heard of them and so I was not too excited about them, but people in our queue did hear them before and said they were great. They were right, and I have added FRANKMUSIK to my list of current favorite bands. They play sort of electronic indie pop tunes and they are pretty talented as they were jumping from one instrument to another. Their album will be released next month, and I’ll definitely be getting it.

Their set lasted about forty minutes,  and when they were finished a bunch of guys wearing white plastic hardhats and white doctor coats, looking like funky scientists, came on and prepared the stage for the Pet Shop Boys, fixing the lights, adjusting the sound and instruments. Then finally, the lights went down and the Pet Shop Boys walked on stage, with squares over their heads and covering their faces, but the crowd went mad anyway and so did I. You could see a little bit of their faces through the squares, and it was exciting! They opened with the PSB classic song “Heart”, after which they removed the squares from their heads and when you finally saw their faces…whoa, what a feeling! I had never seen them live before (my wife had once already), and there they were – looking older, not young anymore and it felt wierd but nice at the same time, because they looked older but their voice and music is exactly the same as when I first heard them over 15 years ago.

A couple of songs in they played “Pandemonium”, mixed with “Can You Forgive Her?” from their album Very, which was a great mix because the two songs do fuse well together. That was a great moment.

Then, there was a truly unexpected moment about halfway through the show when they sang the Colplay song “Viva La Vida”, which we SO enjoyed and liked so much better than the Coldplay version! They made it perfectly Pet Shop Boys style, and it was great.

Their last song before the encore was “It’s a Sin”, at the end of which they exploded two canons of silver confetti over th crowd.

2 hours had gone by so quick – it felt like half an hour. We all wanted more, and they came back on stage for the encore. They sang Being Boring and West End Girls, during which they threw newspapers at us (not sure why) and we grabbed one to keep while people where fighting for them. I also managed to get a silver balloon for my wife.

All in all, a fantastic night. We so want more that we are gonna try to catch them again at another concert in July, either in Liverpool or Paris.

I must say that Pet Shop Boys are the only band that have not changed or become commercial, and have not deteriorated in their quality of songs, lyrics and music since they first began. They continue to produce the same magical music as they have over all these long years. I love them.

Some pictures and videos are posted below. I did not take a lot of them because I wanted to enjoy the night. The video contains bits and pieces of the night. Sorry for the very low sound quality – it was taken with a small picture cam, not made for videos. Also sorry for the stupid hand that keeps appearing to the left – he was a really annoying, aggressive, and self-centred guy in the front row who really aggravated everyone around him with his inconsiderate behaviour, which was so out of place at a PSB show where everyone else was cheerful, friendly, and pleasant! 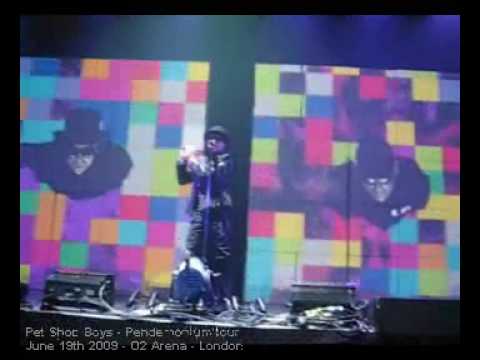