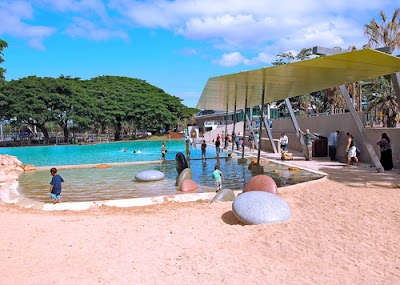 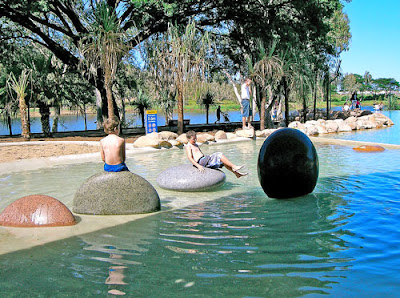 Smarteez’ is a series of pure sculptural forms carved from Australian granites. Seven smooth disks resembling lollies or board game pieces lay scattered across the beach and lagoon as though accidentally dropped. One gleaming black disk appears about to topple in the ‘freeze-frame’ composition imbuing the work with kinetic drama, the tactile surfaces and channels created between the forms inviting interaction from swimmers. A ‘pop art’ installation designed with fun and a sense of play, for children and the child within. Both the architecture and the function of the site have impacted directly upon our design processes and direction. We have chosen to work with rather than against or in contrast with, the vision of the architect, whilst at the same time pursuing our own artistic interests and paths. Our response to the lagoon design was immediate and mutual. What particularly interests both of us is the ‘formal’, ‘informal’ interplay of spaces such as the upper and lower lagoon areas. It is an innovative and fun idea to envisage a rather posh gathering of people sipping wine and exchanging witticisms whilst gazing down on children and their parents swimming, splashing and laying around in the lower lagoon below. Our design has sprung spontaneously through the exploration of the kinds of activities that children usually pursue in waterside environments. Activities that are invariably simple, time honoured and fun.