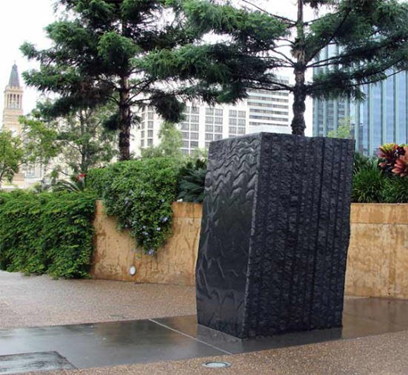 A hydrological cycle is revealed as one moves through the space, at each significant point the physical and psychological relationship between the viewer and the work changes. Through spatial and tactile senses the work endeavours to communicate the nature of its being. The commanding, totemic presence of the monumental threshold block, demands a certain respect, and denotes the beginning of an important experience. Block two is midstream, physically confined by both the width of the stairs/passageway, and by the proximity of the bus shelter and the planter box. In this enclosed space, the tactility of the work engages and draws the viewer to the experience of place. The work has a material intimacy of surface contrasts. The rougher quarried verticals and the seductive smoothness of the top surface now within reach.At the horizon level, the work assumes a new posture that seeks to be both intelligent and inventive. The work becomes paradoxically both more mysterious and easier to decipher. It is at one level an observation on the properties of water, a frozen moment in time. It is also a philosophical symbol of the nature of time…past, present and future and it is a new interpretation, a modern symbol for a modern world that values and celebrates difference, non-conformity and indeterminism.