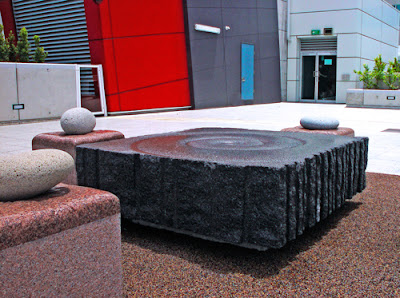 Human beings although aware of their mortality, non the less behave and live their lives as though immortal, illness brings everyone back to the stark reality of that finite equation. Most of us have forgotten or simply ignore what is truly important, instead rush about in the headlong pursuit of the trivial and mundane. Faced with death and illness, we are forced to reflect upon our lives and relationships. Our sudden frailty makes us aware of our interdependence on others and theirs on us. It is not just our physical self that has changed and is challenged, our physic and spiritual selves and called into the fray. The rooftop garden is open to the sky and can with help actively encourage the unfettered meditation and contemplation of our place in the scheme of things. This installation is composed of five granite elements placed in a formal relationship with each other. The central piece acts as a kind of lens around which the other elements focus on and seem to be in dialogue with. Three of these four red elements have perfectly and particularly placed ovoid rocks resting on them. These rocks are intended to symbolise the thought and attention of those in closest relationship with the unwell fourth. The impression of the stones weight and disruption or wrinkling of the polished surface is meticulously carved in a tromp l’oeil manner. The fourth seems almost to be awaiting occupation and or participation in this process. The central grey granite slab appears to float above the ground on which it rests. The never-ending spiral, subtly funnels inwards. The surface has a slightly soft or quilted and undulating appearance. It is pleasingly tactile and visually engaging with the marks of the maker etching its surface.