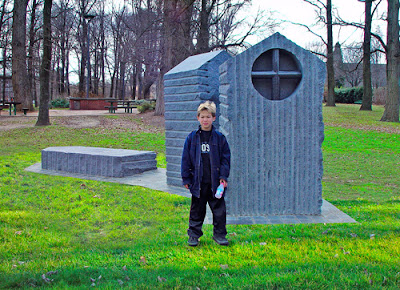 Glebe Park has had an association with the church for more than a hundred years. The role of the church in the white settlement of Australia and the subsequent waxing and waning of its power in western society made it the logical reference point for the design of any sculpture for the site. The house form arouses strong spontaneous associations for most people. Clearly understood as a symbol, the viewer is easily brought into dialogue with the work. The simple form of monolithic proportions appears to be broken into three pieces, these breaks appear to be a natural consequence of historical changes. There are a number of possible readings; the first and simplest concerns the use of the now demolished building, referred to as the rectory. In its first incarnation it was most closely tied to the church, therefore the front face and first third of the house has carved into it the cross, which from early times Christians have used both as a reminder of their faith and as a marker to others (non Christians). The second piece refers to the period when the building was used as a schoolhouse and the last piece refers to its final role as boarding house. The second layer of meaning refers to the Jungian interpretation of the house symbol that it can at different times house the spirit, the intellect and the flesh. Hence, the church = the spiritual, the school = the intellect, the boarding-house = the flesh. The third layer of meaning relates to the changing boundaries and perception…historically and culturally speaking. White settlement of Australia imposed new boundaries; the continent was formally broken up into states and territories, cities and towns, suburbs and streets, quarter acre blocks. The town planner’s grid work neatly divided and divided the land again. The original parcel of land was reduced to its present size successively over the years. This pattern continues even now throughout Australia as formerly rural areas are parcelled up into suburban allotments. The work also alludes to the diminished role of the church in modern times; a hundred years ago it was the bedrock of Australian society wielding great political and cultural clout