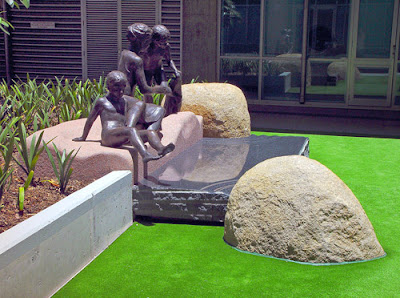 The ambience of the space is that of quiet contemplation and relaxation for the hospital staff. The new sculpture ‘reflection’ is designed to collaborate not only with its architectural surroundings but to also act as a focus point for the large shade tree behind the installation whilst providing a logical juxtaposition with the pre existent work known as ‘The Bathers’, by Philip Piperides. The two sculptures are not integrated to the degree that the uninformed viewer cannot read them as two separate sculptures. This would compromise the works and their respective creators. The Keperra boulders that form parts of ‘reflection’ naturalise the sculpture into its surroundings and invite the viewer to physically interact. The entire work can be sat on. The tromp l’oeil carving of the slab’s top surfaces into a mysterious water like appearance further focuses the viewers attention. ‘The Bathers’ has been sited in such a way as to suggest that they are sitting near to and contemplating the other sculpture. The resultant relationship between the two refers to the affinity human beings have for bodies of water, due in part to the calming effect it usually provokes.