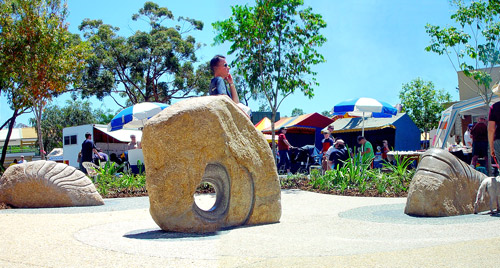 The three main sculptures and accompanying markers all have in common an overt reference to the spiral forms found in most shells of both marine and land creatures. They are designed to be conceptually accessible to all, to invite tactile interaction and to reinforce the importance of the town centre. They also playfully suggest that these giant shells and shell fragments have in eons past been caught and lodged in this catchment area. The boulders from which these fossilized forms emerge are amongst other things meant to act as a direct reference to Seventeen Mile rocks. The markers to be scattered throughout the centre are designed to be initially mysterious and puzzled over. The viewer is expected to work a little for the outcome; much like an archaeologist. When the whole object is eventually known, there is the conceptual ‘ah ha!’ and the attendant pleasure of that discovery.